It should be obvious that the Marvel Cinematic Universe’s WandaVision bears striking similarities in its premise with the 1998 movie The Truman Show. The similarities do not, however, end just with the premises. The mythology from which the two derive their themes is unmistakably that of Prometheus–the Greek titan who stole the fire of the gods and presented it to humans. The way the myth of Prometheus is portrayed by these different contemporary narratives will define which stage of the Gospel-infected trajectory our culture is on.

In both narratives, we see something of a cultural commentary on the American family as informed by twentieth-century television media. Truman Burbank is trapped, unbeknownst to him, in a reality television show where he is the only authentic person surrounded by actors hired by the show’s mastermind creator Christof. In Wandavision, Wanda has created a microcosm of the typical American society, as depicted by television soap operas throughout the decades. Inside her society, Wanda has trapped the residents of a town in a spell where they are forced to act out her fantasy–a soap opera in which she and her husband Vision are the main stars.

The depiction of the typical American nuclear family plays a significant symbolic role at the beginning of both stories. The family, in its Americanized version, is set up as a false idol. This is all the more apparent in WandaVision where it is revealed that Wanda, in a state of grief, has resurrected her dead husband and has enslaved her neighbors so that they may live out their “fantasy.” Upon realizing the error of her ways, Wanda sacrifices her husband and her children to free the enslaved neighbors of her soap opera.

WandaVision puts forward a not so subtle and, indeed, feminist take on the Promethean story. The nuclear family, in true postmodernist fashion, is presented as the God-structure–the patriarchal institution that is holding back the oppressed minorities. Wanda must become the feminist Prometheus and steal the fire that may bring life to the oppressed mortals of the story. The willing sacrifice of Wanda’s children is unmistakably analogous to an abortion, which is the rite of passage towards liberation from the patriarchal power-structure of society. This sacrificial element of the narrative is hardly surprising when we realize that most ancient myths, especially creation myths like that of Prometheus, were cover-ups for the founding murder of civilization.

Because WandaVision’s narrative is significantly affected by socio-political ideology rather than anthropology, its attempt to paint the family unit as an oppressive patriarchal structure rings hollow. It fails, for example, to see the realities behind rituals and taboos. This is ironic because the main character of the story happens to be a witch. This isn’t to say that WandaVision doesn’t attempt to find the truth behind taboos; it just fails miserably because the narrative acts on ideological and hyper-individualistic instinct.

The family unit is not the main oppressive force. Certainly, the family can be considered an outworking of religion to check mimetic rivalry from escalating. Monogamous societies, for example, are far less violent than polygamous ones, where bands of young men deprived of mating opportunities are left to pillage and plunder. The most oppressive force for violence is undoubtedly the persecuting mob. In whatever forms they manifest, the crowd is the most brutal and sophisticated force for aggression in human history, and The Truman Show succeeds in displaying this truth far more than WandaVision.

In The Truman Show, the protagonist is the child of an unwanted pregnancy–an unaware prisoner named Truman, and the antagonist is a reality show creator named Christof. That very name of Christof seems to signify a Luciferian character. Christof, like Lucifer and the Greek gods, has spun a web of drama over the residents of Truman’s hometown. The hypnotized crowd in WandaVision are the pagan gods who are demanding the sacrifice of Prometheus, but the crowd in The Truman Show is under the control of Satan. All of the residents of Truman’s town are turned into mere extras of a TV show; they have only one purpose and that is to keep Truman imprisoned and keep the mythology going.

It is important here to step back and, again, take note that WandaVision is hearkening back to the Promethean myth. Prometheus seeks to break free from the violence of the sacrificial myths, but in his quest to bring freedom to the oppressed mortals, he ends up becoming a sacrificial victim. The late Stanford University anthropologist Rene Girard writes:

Prometheus is the sacrificial victim who is chained and cannibalized over and over again (the eagle perpetually eats his liver) in a repetition of the sacrificial ritual. As a sacrificial victim, he is ‘responsible’ for the invention of culture, he is represented as the matrix from which language, mathematical science and technology emerge.

The Passion narrative, in many ways, is a retelling of the Promethean story. Christ’s death on the cross is eerily similar to the way Prometheus is sacrificed. The crucifixion of Christ is not only a remake of the Promethean myth but is a subversion of that myth in that it short-circuits the notion that civilization can be built upon the corpses of the slain. One of the ways it does this is to have the myth be penetrated by a non-actor–the disenchanted–who makes a mess of everything and does the complete opposite of what the script would demand of him. In the Gospels, this role is fulfilled by Christ.

In The Truman Show, one of the extras, a woman named Sylvia, falls in love with Truman and breaks the suspension of disbelief. She wasn’t the one who was supposed to fall in love with him, but yet Truman cannot help but pursue her. Before being hauled off by the producers, Sylvia tries to tell Truman that everything around him is artificial and not reality. This brief but haunting episode slowly but surely breaks the spell that has been cast upon Truman; it causes him to seek an escape route out of the show’s production set which has been revealed to be his prison.

When Truman first attempts his escape, Christof’s production crew blocks him from every path. But with Truman’s persistence, the production crew, much to Christof’s frustration, gives up trying to block him. Eventually, everyone on set becomes disenchanted from Christof’s spell. Christof makes a last-ditch effort to retain Truman by luring him with the lie of utopia; this does not work as Truman chooses to risk himself in a world of freedom rather than live in relative safety under conformity.

The Prometheus in WandaVision steals a fire that is very much Nietzschean, attempting to bypass the human bonding of affection. By contrast, the Prometheus in The Truman Show chooses not to ignore the bonding of affection; in fact, Truman is driven by his haunting love for Sylvia and upon escaping, he has every intention of reuniting with her. Therefore, the fire that Truman’s Prometheus steals from Lucifer is the fire of freedom and love. In this regard, it is probably safe to assume that Truman Show is the Christianized version of Prometheus while WandaVision is its classical (or perhaps Nietzschean) version. 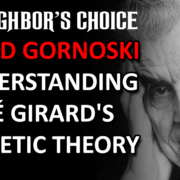 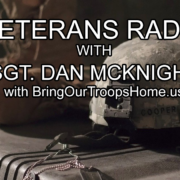 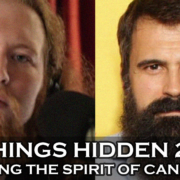 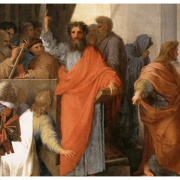 The Exorcism of a Possessed Market

Statism Is a Sacrificial Religion 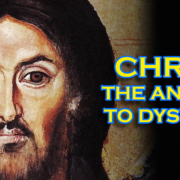 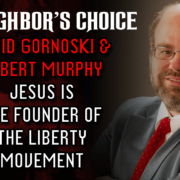